The Office of Naval Research is funding UA research to improve wireless communication in environments with scarce or unreliable networks. 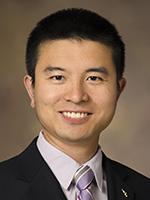 Electrical and computer engineering associate professor Ming Li is the first faculty member from the University of Arizona to receive the highly competitive Office of Naval Research, or ONR, Young Investigator Award since 2010. The award will support his work in reconfigurable antennas with wireless networks.

Li was one of 47 recipients to receive an award through the ONR's Young Investigator Program, or YIP, which provides early-career academic researchers a three-year grant of more than $500,000. Winning proposals were selected from 280 submissions based on the researchers' past performance and long-term university commitment and on the projects' technical merit and potential for scientific breakthrough.

"The YIP Program is in its 31st year at ONR, and the award is still very competitive," said Larry Schuette, ONR director of research. "We are fortunate to be able to attract the top researchers to the fundamental science that underpins the Navy and Marine Corps of today, tomorrow and the future."

Li's research will adapt reconfigurable antennas, or RAs, to work with multihop wireless networks to improve transmission capacity and speed, reduce the chance of lost data, and limit reliance on costly infrastructure.

Reconfigurable antennas are not a new technology, but past research into their benefits has mostly focused on their use with single-hop networks, in which data only has to make one “hop” or connection from its source to its destination. A home router connected to the Internet is one example.

Reconfigurable antennas in these cases were used to reduce wireless interference by changing the direction of the signal. Unlike a single antenna that is only capable of transmitting a wireless signal in one fixed direction, a reconfigurable antenna can be programmed to change its radiation direction and transmit in multiple directions. They are also capable of changing their polarization and frequency, and their smaller size makes them ideal for locations where large radio towers are infeasible.

If an RA can do so much for a single-hop network, Li wondered, why not exploit their advantages in larger, multihop networks, such as those used by the military?

In a multihop wireless network, or MWN, data travels through a series of connection points – modems, routers, servers or satellites – hopping from one link to another until it reaches its destination. MWNs, like traditional wireless networks, are susceptible to interference, and with more links for the data to hop through, there’s more potential for transmission delays and signal loss along the way.

In spite of their challenges, MWNs are frequently used in military operations because of their security and range.

Imagine "there are multiple soldiers in the field, and we want to monitor their health simultaneously using sensors on their uniforms," said Li. "With a multihop network and a reconfigurable antenna, we could set up a network quickly with little money or without the need to build fixed infrastructure like a radio tower."

With funding from the ONR award, Li first plans to identify the theoretical limits of RAs, such as their transmission capacity or the speed at which they can adapt to a network's changing needs. Once the limits are established, he'll turn his efforts toward building an algorithm for the RA software that will determine the best setup for each connection point in a MWN. Li's work will face many potential challenges associated with integrating RAs into multihop wireless networks, including the large number of possible antenna state configurations, constrained network resources, and communication overhead. He will tackle those challenges with tools from optimization, graph theory and machine learning. If his research is successful, the algorithm will boost the MWN's ability to send data quickly and reliably without congested signals.

"The results of Dr. Li's research could have far-reaching benefits, not just for military operations but also for businesses and consumers all over the world who are becoming more and more reliant on wireless data transmission," said Tamal Bose, head of the University of Arizona's department of electrical and computer engineering. "It is a great honor to be selected for the Navy's Young Investigator Award, and we are especially proud of Ming Li for this accomplishment."

Li, who joined UA Electrical and Computer Engineering in 2015, is a graduate of the Worcester Polytechnic Institute and co-author of a book on multihop wireless networks. He is the recipient of numerous awards, including the National Science Foundation’s Faculty Early Career Development Award in 2014.