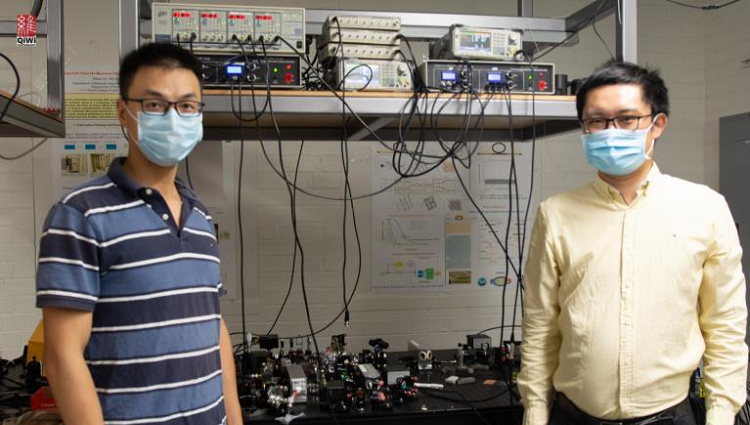 Quntao Zhuang and Zheshen Zhang are both assistant professors in the College of Engineering.

In a new paper published in the journal Physical Review X, ECE assistant professor Quntao Zhuang has demonstrated a "long-sought-after goal" in the realm of quantum computing. Zhuang co-authored the paper with MSE assistant professor Zheshen Zhang, showing how quantum resources aren't just dreams for the distant future – they can improve the technology of today.

Quantum computing and other quantum processes rely on tiny, powerful units of information called qubits. The classical computers we use today work with units of information called bits, which exist as either 0s or 1s, but qubits are capable of existing in both states at the same time. This duality makes them both powerful and fragile. The delicate qubits are prone to collapse without warning, making a process called error correction – which addresses such problems as they happen – very important.

The experiment described in the paper used a mix of both classical and quantum techniques. Specifically, it used three sensors to classify the average amplitude and angle of radio frequency signals.

The sensors were equipped with another quantum resource called entanglement, which allows them to share information with one another and provides two major benefits: First, it improves the sensitivity of the sensors and reduces errors. Second, because they are entangled, the sensors evaluate global properties rather than gathering data about specific parts of a system. This is useful for applications that only need a binary answer; for example, in medical imaging, researchers don't need to know about every single cell in a tissue sample that isn't cancerous – just whether there's one cell that is cancerous. The same concept applies to detecting hazardous chemicals in drinking water.

The experiment demonstrated that equipping the sensors with quantum entanglement gave them an advantage over classical sensors, reducing the likelihood of errors by a small but critical margin.

"Demonstrating a quantum advantage is a long-sought-after goal in the community, and very few experiments have been able to show it," Zhang said. "We are seeking to demonstrate how we can leverage the quantum technology that already exists to benefit real-world applications."