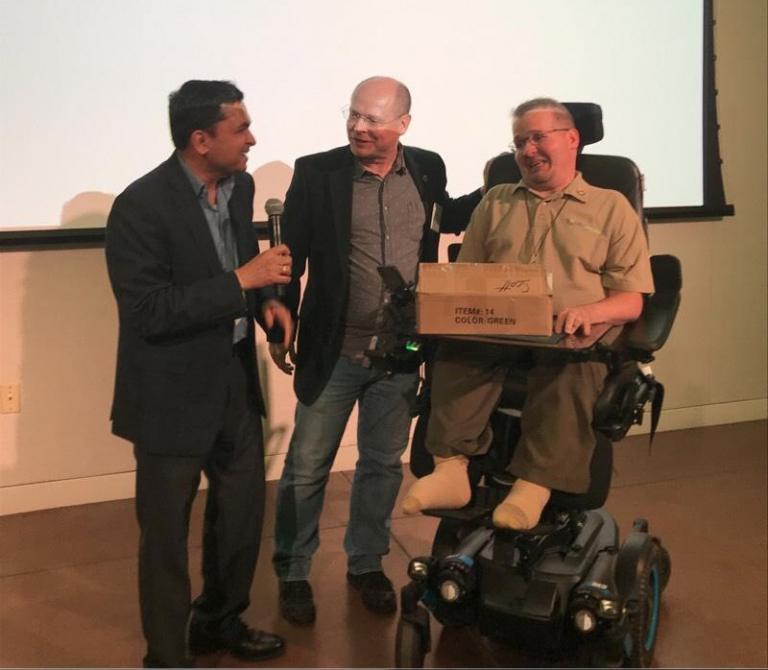 Wolfgang Fink (center) served as the general conference chair for PHM 2019. To his left is Piyush Modi of NVIDIA, a conference sponsor. To his right is Scott Clements receiving the PHM “Most Valuable Person” award, before it was named after him in 2020.

The Prognostics and Health Management Society has elected Wolfgang Fink, electrical and computer engineering and biomedical engineering professor and inaugural Edward & Maria Keonjian Endowed Chair in the College of Engineering, as the organization’s vice president.

Founded in 2009, the PHM Society is a nonprofit dedicated to advancing the discipline of PHM, which draws from aerospace, artificial intelligence, health care, physics, materials science and many branches of engineering, among other fields. Fink has been involved with the organization for many years, first giving a presentation in 2013 as a luminary speaker.

"I feel deeply honored by the confidence entrusted to me by the Executive Board of Directors to help define, direct, and advance the goals and aspirations of the PHM Society," Fink said. "Taking on such a leadership role is the culmination of my involvement with the PHM Society."

Shortly before his vice presidential appointment in 2020, Fink received the inaugural Scott Clements Most Valuable Person Award at the PHM Society’s 12th annual conference. The conference brings together experts from industry, academia and government in areas ranging from autonomous vehicles to precision agriculture to wind energy. He also served as the general conference chair for the PHM Society's 2019 Conference, the organization’s most successful conference to date in terms of attendance, revenue, sponsorship support and number of countries represented. It also included the first-ever PHM for Precision Agriculture panel. He also established and led the PHM for Human Health & Performance panel over the last several years and served as a member for the Fellow and Lifetime Achievement awards committee of the society.

Fink is also an executive committee member for the PHM Society's Board of Directors, and served as the guest editor for PHM for Human Health & Performance, a special issue of the organization’s flagship publication, the open access International Journal of Prognostics and Health Management. In 2018, he was named a fellow of the society for being “one of the preeminent researchers in the fields of PHM for autonomous systems and human health & performance.”

“I’ve known Wolfgang for a number of years now, and I’m very impressed with his ability to understand across technical disciplines and different industry applications,” said PHM Society President Andrew Hess. “I think he’ll be a big asset to the society, which is growing every year.”