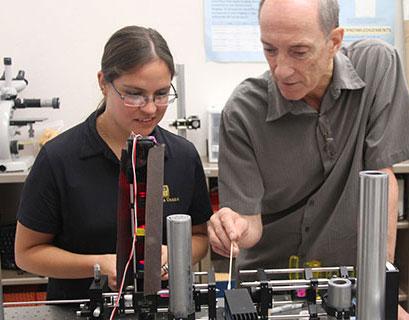 Raymond Kostuk and one of his grad students, Isela Howlett, test the new bench-top imaging instrument for ovarian cancer.

Raymond Kostuk and his research team have developed a bench-top version of an instrument capable of detecting ovarian cancer, a disease often referred to as the “silent killer” because it presents no symptoms until it is highly advanced

Working with Dr. Kenneth Hatch, of the University of Arizona’s College of Medicine, and his consenting patients, as well as researchers in the BIO5 Institute, Kostuk and his co-investigator Jennifer Barton, who now holds the position of associate vice president for research at the UA, have completed a study of cancerous and non-cancerous ovarian tissue in which the imaging system successfully identified abnormal spatial and spectral markers of cancerous ovarian tissue removed during surgery.

Now the research team is working on a miniature endoscopic version that further enhances imagery, achieves even greater contrast, and is capable of reliably diagnosing ovarian cancer in real time during noninvasive laparoscopic procedures and screenings.

“The instrument is cost effective, easy to use, and holds the promise of saving lives,” said Kostuk, who holds a joint appointment in the College of Optical sciences,

The National Institutes of Health has provided significant funding for the research, and Kostuk is in the process of seeking renewed funding. Patents and invention disclosures have attracted the attention of several investment groups.

“Commercialization of the instrumentation may not be far off,” Kostuk said.