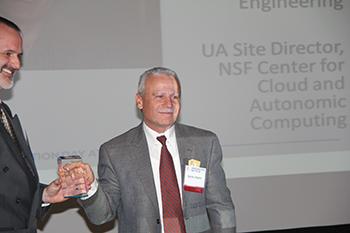 Salim Hariri accepts a UA Technology Innovation Award for his work in cybersecurity.

Salim Hariri, professor of electrical and computer engineering and UA site director for the National Science Foundation Center for Cloud and Autonomic Computing, is considered to be among the best of the best when it comes to University of Arizona innovators. Hariri, who has developed a cyber-nervous system to protect against cyber-attacks, and five of his UA colleagues recently received UA Technology Innovation Awards recognizing their entrepreneurial contributions.

During the awards presentation and panel discussion on March 28, 2013, Hariri advised young researchers to focus on work that reaches the masses and makes a difference. The litmus test, he said, is whether the work will result in something “somebody can pick up and use.”

Recent advances in computing, networking, software and mobile technologies have led to the development of cyber-resources, such as cloud computing, that are significantly changing the way we do business, maintain our health, conduct education, and entertain ourselves.

These advances, however, are not without their fair share of challenges. Increasingly complex, automated cyberprocesses for personal, scientific, business and government activities are becoming more and more difficult to manage and presenting greater and greater security risks.

The list of security failures -- even considering only websites or services from which hackers actually took over accounts, stole data or money, or planted malware to help steal data or money -- is long and distinguished: Google, LinkedIn, Twitter, Hotmail, Global Payments, Federal Express, Zappos, a host of local bank and police agencies, and even the China Software Developer Network, which, all by itself, lost to a single hacker personal information on six million users.

The technology Hariri and his research team have developed was inspired by the human central nervous and has the potential to revolutionize how we manage, secure and protect our cyber-resources using autonomic computing.
Hariri’s cyber-security algorithms enable computers to tolerate cyber-attacks, failures or accidents, with minimal involvement of system users and administrators. The technology has been licensed to Avirtek, a startup company Hariri founded. In 2011, the Security Innovation Network named Avirtek one of the most innovative cyber-security startup companies in the United States.