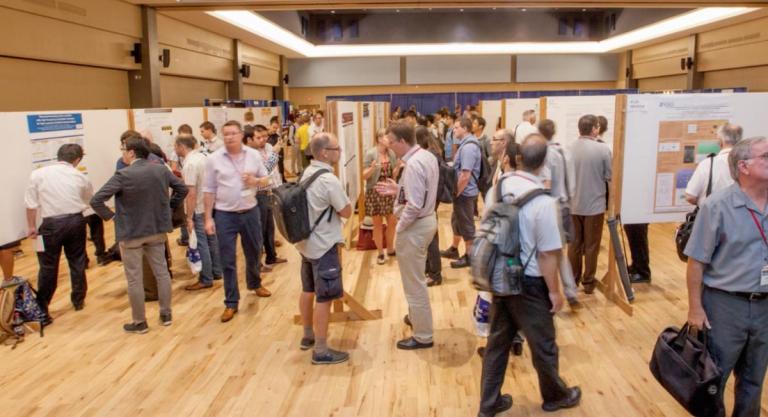 UA students mingle with researchers from around the world during a poster exhibit at the 39th annual International Conference on Infrared, Millimeter, and Terahertz Waves, held at the University of Arizona.

UA undergraduates and graduates interacted with more than 500 participants, including two Nobel Laureates, at the 39th annual International Conference on Infrared, Millimeter, and Terahertz Waves, held at the University of Arizona in September 2014.

Among the experts in science, technology, engineering and astronomy from 35 different countries were Nobel Laureates in physics John Mather and Serge Haroche, who were awarded in 2006 and 2012, respectively. Haroche, a professor at College de France, gave a plenary talk about exploring the quantum world through microwave photons, and Mather spoke about NASA’s upcoming 2018 launch of the James Webb space telescope.

“We have been so lucky to hear from these Nobel Laureates, along with several others, who are truly advancing the work of infrared, millimeter and terahertz research,” said Hao Xin, UA electrical and computer engineering professor and conference general secretary. “We were honored to serve as a gathering spot for scientists around the world who are moving this technology forward.”

Not only did UA College of Engineering students participate in the conference, but they also played a critical role in hosting it. More than 40 undergraduate and graduate student volunteers, the bulk of whom were UA students, helped run the conference -- from planning activities and events to setting up presentations.

“These volunteers worked closely with giants in engineering and science, and that will inspire the students to contribute to the engineering community in even greater ways,” said Xin.

“It's great for students to volunteer because they can attend the conference for free and become more familiar with current research while exchanging ideas with top researchers,” she said.

The theme of this year’s conference was "THz: The Next Generation," emphasizing the new disciplines, applications and people who have recently entered the field.

Jenna Kloosterman, an ECE graduate who is now employed by NASA, returned to campus to attend the conference.

“It’s extremely relevant for anyone in these fields to attend a conference like this,” Kloosterman said. “While exchanging ideas, you begin to understand how you can incorporate the knowledge you’ve learned into your own research.”

“I am delighted and feel honored that such a high profile conference was held on our campus this year,” Bose said. “Given the subject of the conference, it is also very appropriate since the University of Arizona is world renowned for its research programs in astronomy, physics, optical sciences, engineering and many related fields. “