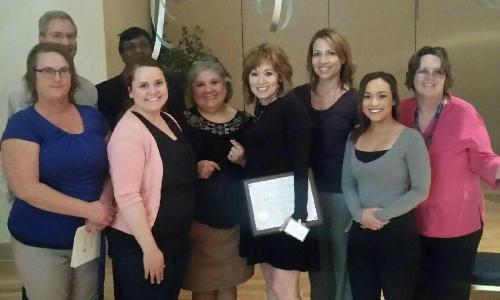 Rozanne Canizales (center) celebrates her award with members of the ECE team.

Go-to-gal; source of all knowledge; ambassador for the unit: These are just a few of the descriptions given to Rozanne Canizales, administrative manager for the Department of Electrical and Computer Engineering, or ECE, at the University of Arizona. She's earned them all, and she's just been formally recognized for her commitment.

Canizales is among 11 staff members chosen to receive 2016 University of Arizona Awards for Excellence from the Office of the President. The honor recognizes staff whose outstanding achievements benefit all or much of the university.

"It is humbling to know how much I am valued and appreciated by [ECE department head] Dr. Tamal Bose and the others who supported this nomination," she said. "It is truly an honor; joining the UA was one of the best decisions I've ever made."

Canizales started her UA career in 1980 as a secretary at the Main Library, followed by six years at what was then the College of Mines. Gradually, the college morphed into the College of Engineering, and Canizales' career evolved along with it. In 1987 she joined ECE as an administrative associate and became administrative manager in 2007.

"Competent, dedicated staff members are the glue that holds a complex organization such as a large research university and its various units together," said Kenneth Galloway, ECE department head from 1986 to 1996 and dean of the School of Engineering at Vanderbilt University until 2012. "Rozanne is U of A glue."

Among her myriad duties, Canizales assists the department head with coordination of annual evaluations, promotion and tenure packages, sabbatical submissions and post-tenure reviews; oversees arrangements for seminar series and pre-commencement ceremonies; and serves on the hiring committees for a number of administrative and advising staff. She's also been known to step in as an ad hoc adviser to students.

"Rozanne takes a very strong personal ownership of all the matters that she handles," said University Distinguished Professor Jerzy Rozenblit, who led the department from 2003 to 2011. "Driven by a profound sense of responsibility and ambition, she continually strives to ensure that ECE and all its members are successful. The institution's success is intrinsically coupled with her sense of personal accomplishment."

"I often joke that Rozanne is psychic and she reads my mind. But in reality, it is her sharpness, intuition, attention to details, and most important of all it is her caring personality. She cares deeply about this department and her work," wrote Bose. "It is not easy to be mediator, mentor, supervisor, teacher, and problem solver, all at the same time. She has a tough job, but she does it amazingly well."