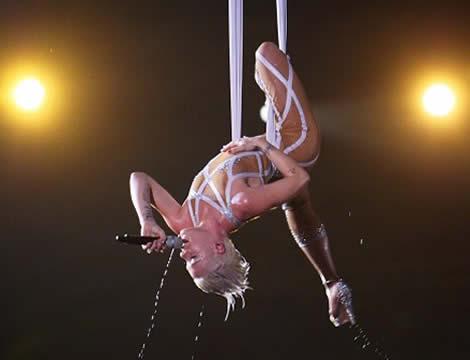 Performances like this one by singer Pink in midair at the Grammys, with special automated equipment, increasingly rely on the skills of engineers and computer experts to safely guide the acrobatics.

Think of engineering and the first image that pops into your mind probably isn't the acrobatic pop star Pink, singing while suspended above the audience from a silky trapeze at the 2010 Grammy awards.

Pink and many other rock stars, Broadway actors and, in particular, the performers of Cirque du Soleil, need engineers and computer programmers to help them wow audiences and to assure their safety.

University of Arizona computer engineering graduate Phillip Toussaint spends his days and some long nights in front of a computer screen, writing code, but he also gets to see the results of that hard work extravagantly performed on stage.