UA Engineering Gets $2M from U.S. Army for Research into Computer Models of Unconventional Warfare 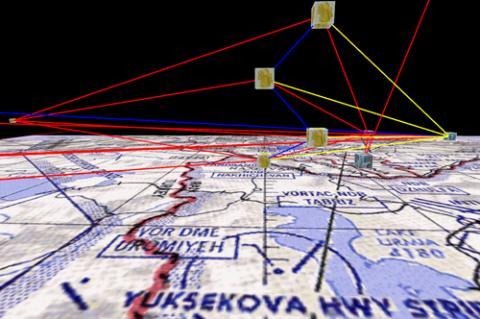 A screen image from the ATRAP system shows how various relationships are rendered in the three-dimensional thoughtspace.

The U.S. Army has awarded another $2 million to Professor Jerzy Rozenblit to fund phase 2 of a project to design intelligent software that can analyze the behavior and customs of political and cultural groups.

In 2007, the Army awarded Rozenblit $2 million to fund the recently completed phase 1 of the Asymmetric Threat Response and Analysis Project, known as ATRAP. Rozenblit holds the Raymond J. Oglethorpe endowed chair in electrical and computer engineering, and is head of that department.

In the context of armed conflict, “asymmetric” describes opposing forces that differ in terms of size, strength, resources, tactics, armaments, strategy, technology or motivation. Forging peace between such disparate belligerents has confounded negotiators for centuries.

The ATRAP software will enable intelligence analysts to build up three-dimensional maps of interactions between conflicting groups. By mapping behavior, relationships, resources, events and timelines, analysts hope to be able to predict, and therefore prevent, eruptions of violence.

Can a computer model prevent a war? It is compelling to imagine what the world look like today had such software been available during historical asymmetric conflicts, such as between the Greeks and Persians at Thermopylae, or the Rebels and British during the Revolutionary War. Few would deny that war is an existential reality of the human condition, but Rozenblit acknowledges that this project is entering the realm of science fiction. “It is very intellectually stimulating and goes well beyond the normal focus of engineering,” he says. “A lot of it is discovery and creation, so it’s fun.”

Rozenblit envisions the ATRAP software as a tool that will allow opposing groups to sit down at the negotiating table and rationalize particular approaches to achieving peace. “I call it CPR, which in this case stands for conflict prediction and resolution,” Rozenblit says. “Ultimately, these mathematical tools are intended to generate solutions that give us equilibrium, or status quo solutions.”

Such solutions require that multiple parties sit around the negotiating table and try to reach a win-win situation, says Rozenblit. “These tools allow us to compute measures that don’t necessarily maximize reward,” he says. “Instead, the tools can be used to convince negotiating parties that it would not be in their interest to deviate from the proposed solution because they would actually lose more than they gain.”

Phase 1 of the project involved “designing the blueprints of the system,” says Rozenblit. “We assembled a very strong team of software developers, engineers and architects to set up a solid foundation on which to build the suite of software tools, and to provide a springboard from which we can do very advanced research.” This advanced research will be the focus of phase 2.

Brian Ten Eyck, director of research support in the Department of Electrical and Computer Engineering, describes the main planks of the research as “behavior modeling” and “entity extraction.”

ATRAP’s three-dimensional behavior modeling is based on maps—satellite images, for example— with two dimensions: latitude and longitude. The third dimension, time, is added to create what Ten Eyck describes as a “thought space.”

This third dimension consists of people, groups and events and their locations in time, but also more abstract entities such as relationships and affiliations. “There’s a person here, there’s an organization there, an explosion took place here,” says Ten Eyck. “These things are all connected and the thought space shows you lines that connect the place where the bomb blew up and where the bomb-maker lives, for example. And there’s a slider that lets you move back and forth through time so you can see how events unfold or change over time in a particular region.”

Creating software that can compute these abstract entities is “very, very tough,” Rozenblit adds. “How do you express the level of affinity between certain groups of people?” he asks. “If they are related, maybe that affinity stems from their blood relationship. If they are friends, maybe it’s the years that they have spent together.” To understand these group dynamics and the complexities of modeling political conflicts, which Rozenblit calls “soft factors,” the ATRAP team has enlisted help from the political science department and Eller College of Management.

“A lot of research is going into these soft factors,” says Ten Eyck. “It will enable us to overlay a sort of behavioral filter and understand these cultural affinities, and understand the technical capabilities and financial resources of different organizations.” This understanding already has created the ability, albeit rudimentary, says Ten Eyck, to predict potential courses of action.

The “entity extraction” referred to by Ten Eyck describes software that can parse text and extract meaningful information. “News bulletins, intelligence reports, e-mails—terabytes of data, more than any human can read—are constantly streamed into the database,” says Ten Eyck. “The software can pull out the name of somebody, his or her title, the fact that they work for this organization, that they were born in this location, whatever the content of the message may be. It’s not a hundred percent foolproof, which is why it’s being researched. We’re trying to improve the ways that machines can extract those entities, possibly even connect them, link them together.”

ATRAP’s potential spreads far beyond the limits of defense, says Rozenblit, into the financial world, for example, “to combat financial fraud.” He also cites disaster relief and epidemiology as areas that could benefit from ATRAP’s analytical and mapping capabilities. Ten Eyck points out that the project as a whole fulfills UA’s land-grant mission. “We are engaging software developers here in the community,” he says.

Ten Eyck is referring to Ephibian, a Tucson-based software development firm that works closely with the ATRAP research team to bring its ideas to fruition. A few College of Engineering alumni founded Ephibian after working together on highly complex multimillion-dollar software projects in the U.S. Army. Rozenblit describes Ephibian as “the Maserati of software writing” and says: “For our students, working with a professional software engineering company of this caliber is the best internship you can imagine.”

“The project represents net new dollars to the region, it’s interdisciplinary and it’s putting students in touch with corporations that can offer them jobs once they get their degrees,” Ten Eyck says. “It’s doing all the things that the university is chartered with doing.”