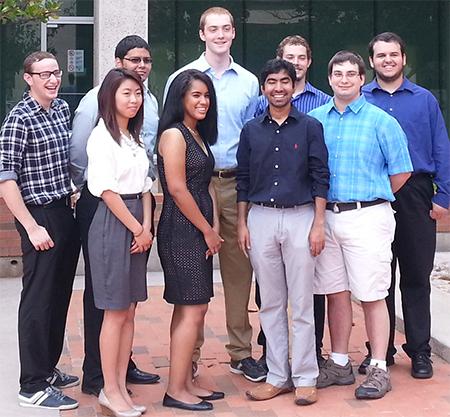 Undergraduate students from across the United States take a break from participating in this summer's REU CAT vehicle research program.

Nevada, California and Florida recently passed laws allowing limited testing of self-driving vehicles on their state’s roadways. Google’s experimental driverless cars already are zipping around California’s Silicon Valley. Automakers like Audi, Toyota, Mercedes-Benz, Volvo and BMW are debuting prototypes of self-driving cars. And, undergraduates from across the country are at the University of Arizona this summer doing their part to make autonomous vehicles safe and reliable.

Ten students from Alabama, Ohio, Utah, New York, Arizona, Massachusetts, West Virginia, Virginia and even as far away as Puerto Rico are participating in a 10-week College of Engineering summer program focused on advancing the UA’s Cognitive and Autonomous Test vehicle, or CAT vehicle.

The program, Research Experiences for Undergraduates, is funded by the National Science Foundation and provides opportunities for undergraduates to work with faculty mentors and graduate students at universities throughout the United States. REU programs, which are geared largely toward students who otherwise might not have opportunities to do research, are among the most prestigious summer programs for undergraduates.

"The goal of the REU program is to broaden the participation and research much further than it traditionally has been," said electrical and computer engineering assistant professor Jonathan Sprinkle, a recent NSF Career Award winner who is leading the 2013 UA REU program. "When the students leave here, they’ll know what research is, and they’ll know how interested they are in doing research. It’s an exploration."

While students are weighing whether research is right for them, they also are gaining invaluable experience in wireless networks, cognitive radio technologies, embedded control systems and algorithms, sensory data processes and sensor fusion.

"Who doesn’t want to work on a robotic car?" said Nicole Chan, a UA electrical and computer engineering junior, who is helping with an interface that will make it easier to design and implement controllers for the CAT vehicle.

Chan is one of two University of Arizona students participating in the CAT vehicle REU. She didn’t have to travel far to move into Coronado Residence Hall, where all the REU participants are staying. But Miguel Angel De Jesus, who in the fall will be starting his fourth year in a five-year electrical engineering program at the University of Puerto Rico at Mayagüez, flew more than 2,000 miles to take part in a program he considers the chance of a lifetime.

Learning all the new programming and software for the CAT vehicle in just a few short weeks was challenging even for someone who loves computers and programming. "But it’s something that I like," said De Jesus, who never thought that at this point in his life he’d be contributing to such a significant research project. "I could be in all day working on it, and I would not mind."

De Jesus is working with light detection and ranging, or LIDAR, a remote-sensing technology that uses data gathered from bounced light to create detailed 3-D maps, and in this case enables the CAT vehicle to detect obstacles.

In partnership with the University’s UROC, or Undergraduate Research Opportunities Consortium, the REU students -- along with about 130 other students from schools in the United States, Puerto Rico, Mexico and Latin America -- are participating in various other UA summer programs, including study sessions, workshops and tutorials designed to help students prepare for graduate school entry exams.

"One day I want to become a professor and help other people learn," said De Jesus. "If I could, I would study all my life. It’s like a challenge; the more you study, the more you learn, and the more you realize that there’s more you need to learn."

But studying all the time may just have to wait, at least a few more weeks. During their time at the UA, REU and other UROC students are having a bit of fun as well, touring the UA Steward Observatory Mirror Casting Laboratory and Biosphere 2, visiting the Sonora Arizona Desert Museum, and enjoying pool parties, barbecues, hikes, movie nights and river floats.

De Jesus and his summertime classmates will return to their hometowns in August not only more knowledgeable about the inner workings of robotic vehicles and better acquainted with America’s Southwest, but also with letters of recommendation from UA faculty mentors and personally created videos featuring their research experiences.

"I hope this experience will make me a better person," said De Jesus. "I just want to become someone who my future children will be proud of."