Printing the Future of Engineering 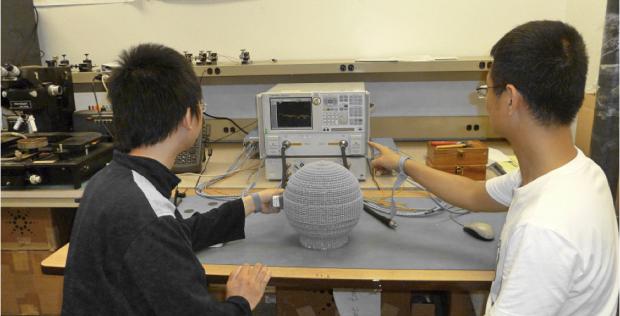 Students in Hao Xin's lab perform measurements on a 3-D printed prototype of a Lüneburg lens.

Hao Xin opens the door to his lab and points to an object that looks like some kind of strange, synthetic sponge made by an alien race much more advanced than ours.

"This is a prototype of a Lüneburg lens that we made," Xin says.

Never mind the fact that it's neither transparent nor made of glass, but of a porous yet weirdly symmetric-looking, plasticky substance of oddly unappealing, pale gray color. Move your eyes closer, and your mind gets lost in a dazzling array of a myriad of tiny branchlets connected to each other at right angles, forming a thicket that gets denser toward the center of the object.

"This lens is not made for light," Xin says, "but for electromagnetic waves in the terahertz range, which is between microwaves and radio waves."

Now things make a bit more sense. Unlike light visible to humans, which is pretty picky and travels only through air, water or transparent things (for the most part), terahertz waves pass through anything from synthetics to textiles to cardboard. Because many biomolecules, proteins, explosives or narcotics absorb terahertz radiation in telltale ways, waves of this range can be used to detect such substances in airport security lanes, for example.

Xin, a professor in electrical and computer engineering who heads the Millimeter Wave Circuits and Antennas Laboratory at the University of Arizona's College of Engineering, is harnessing the possibilities of three-dimensional printing to create materials and structures that not too long ago would have been written off as science fiction.

"By using 3-D printing and new design approaches, we are able to come up with components such as antennas, wave guides, lenses and holographic devices that are better than existing technology and haven't been possible to make before," he says.

As computers, communication devices and other IT applications get smaller and can do ever more amazing things, engineers have to overcome ever greater challenges in designing and building the components that make them work.

Some applications require the invention of new materials. Some require new ways of manufacturing. And some require both.

Xin's group is one of the first to adopt 3-D printing approaches to make so-called metamaterials, engineered materials with properties not found in nature. Unlike conventional materials such as metals or plastics, metamaterials consist of assemblies of elements made from conventional materials, usually in repeating patterns. Their special properties arise not so much from the properties of their ingredients, but from the shape, geometry and orientation of their subunits. They can be designed to affect electromagnetic waves, sound and even the shockwaves of an earthquake in ways that would be impossible to achieve with traditional materials.

"Traditionally, it has been very difficult to make those three-dimensional, periodic structures," Xin explains. "Oftentimes, someone produces a two-dimensional prototype of a three-dimensional object to demonstrate some desired property, but those aren't very practical, nor do they have all the properties they need in order to work for application in question."

"A Lüneburg lens makes a fantastic antenna that can be used for wireless communication and radar installations," Xin says, "but traditionally it is built manually, which is not cost-effective, and you can't make it very precise. Now we can make it at much lower cost and more precise."

Xin's lab also uses 3-D printers to make a range of conventional things, such as regular antennas and integrated circuits. It is one of the first to apply the approach to metamaterials to build innovative electromagnetic applications, and it has support from the National Science Foundation, the U.S. Air Force Office of Research, Raytheon and even Google.

Earlier this year, the team made waves when it published the first successful attempt at designing what many consider the holy grail of metamaterials: a negative refraction metamaterial that not only bends electromagnetic waves (in this case, microwaves) backward but also does not diminish energy in the process. All previous designs suffered from the fact that the waves lost a large portion of their energy when passing through the material.

One of them is a so-called phased array, a sophisticated assembly of antennas capable of focusing and pointing a beam of electromagnetic radiation. Used in radar applications for a long time, such arrays form a vital part of the next generation of wireless communication such as the 5G network.

"Unlike rotating radar antennas that you see at airports, which are limited to rotating speeds based on mechanical parts, a phased array doesn't move and has no moving parts that can fail," Xin explains. "Plus, the antenna can scan as fast as microseconds and in any direction you want.

"But for traditional phased arrays, the manufacturing cost and the mechanical assembly are quite expensive, and sometimes problematic. So if we use a 3-D printer where we can print a vertically integrated phased array, it is cheaper and offers better performance in a smaller footprint."

Therein lies the main advantage of 3-D printing over traditional assembly, according to Xin: It becomes possible to build extremely complex and intricate structures consisting of different materials in three-dimensional space rather than by stacking two-dimensional components, each made from one material.

"Take the way we design electronic components, for example," Xin says. "Traditionally, everything is printed on a flat circuit board, and if you need vertical integration, you have to make another board, and another, and then you connect them together. That is a costly process."

"It doesn't matter how complicated the structure you're building," he says. "You can even think more futuristically. Your smartphone is essentially a three-dimensional block made of metal, glass, semiconductors and plastics. Of course, today we can't yet do this, but if 3-D printing technology becomes sufficiently advanced, we may be able to print the whole cellphone at once."