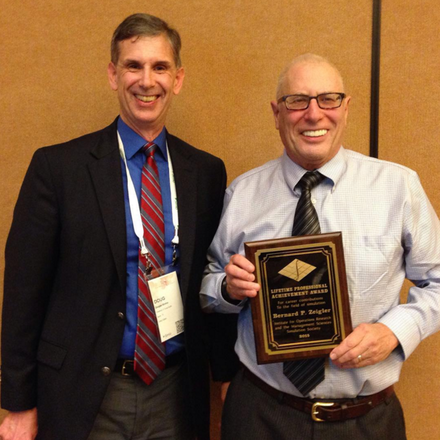 The Institute for Operations Research and the Management Sciences, or INFORMS, Simulation Society has presented Bernard P. Zeigler with its 2015 Lifetime Professional Achievement Award—the society’s highest honor—for his contributions over the last 40 years to computer modeling and simulation.

Zeigler, whose work led to the creation of modern simulation programming languages, joined the University of Arizona College of Engineering in 1985 as a professor. He taught discrete event simulation, software engineering, and artificial intelligence at the graduate and undergraduate levels.

"Regarding knowledge dissemination, it is difficult to match Professor Zeigler’s record," INFORMS noted in announcing the award. "Professor Zeigler's hundreds of scholarly publications in journals, proceedings, and books make him one of the most highly cited scholars in our field."

Zeigler is perhaps best known for his 1976 invention, Discrete Event System Specification, or DEVS, a model for organizing complex systems into a series of smaller, individual elements (discrete events) to predict how the whole system will react if an element in the series is changed.

A hospital, for example, can use DEVS to simulate how factors such as patient arrival time, illness type or staffing level affect patient flow in a packed emergency room.

For his efforts in DEVS, Zeigler was named Fellow of the IEEE in 1995. Among his other achievements, Zeigler served on three National Research Council committees. In 2001 he co-founded the Arizona Center for Integrative Modeling and Simulation.

Zeigler retired from the University in 2010 and became professor emeritus in 2011. He is chief scientist at RTSync Corp. in Phoenix, Arizona and lives with his wife near Rockville, Maryland.