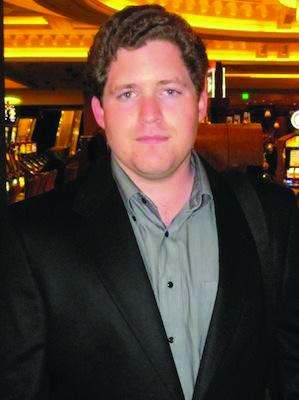 The magazine published its annual list of stars in January. Nominees were chosen based on their ability to stay ahead of the trends, significantly perform in their industry and outperform their peers.

Patrick Marcus, president of Marcus Engineering, a Tucson electronics firm that supports product development for a variety of industries focusing on medical devices and medical instrumentation, nominated Laity for the award.

Laity interned at Marcus Engineering while he was a student at the University of Arizona and is now an electrical engineer with the company.

"We are so proud to have Robbie as part of the team. He’s a brilliant and generous engineer," said Marcus, a UA alum who earned his undergraduate degree in electrical engineering in 1999 and his doctorate in biomedical engineering in 2006. "Recognition like this proves that we are doing the right things as a community to grow and maintain top talent."

Laity was on the Senior Design Project team that won Best Overall Design at the UA’s 11th annual Engineering Design Day. The team designed a robotic fish with the purpose of teaching aquarium visitors about underwater environments.

Laity spends much of his spare time volunteering at Xerocraft Hackerspace, a do-it-yourself space that provides innovators with the room and resources to create. He also often stops by the UA’s Institute of Electrical and Electronics Engineers chapter to check in on the student club that he once led as president.

"One of my proudest accomplishments in college has been turning the club into ECE’s own little maker space that supports many students in their class work and senior projects," Laity said.