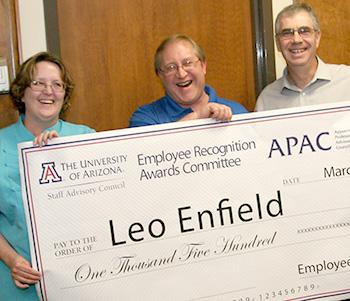 Leo Enfield, College of Engineering information technology manager, sees himself as just a cog in the wheel of a machine that makes the UA one of the world’s great research universities.  But the fact is he represents the best of the best among University of Arizona staff.

At an institution with 15,000 employees, Enfield alone was singled out to receive the 2013 Billy Joe Varney Award for Excellence. The Billy Joe Varney Award is named for a man who dedicated three decades of service to the University of Arizona, who always put the larger good of the University before his own personal gain, always went the extra mile,and always made others feel special. The award is given annually to one UA employee who has at least 15 years of continual service to the University and who lives and acts in the spirit of the man for whom it was named.

Leo has shown identical qualities over the past 20 years," said College of Engineering Dean Jeff Goldberg. "He has worked hard, learned a great deal, and always put the interests of the University first."

Enfield was surprised by friends, family and colleagues on March 7 with the announcement of the award and an accompanying $1,500 check. Official presentation of the Billy Joe Varney Award and other annual awards for excellence will be made by UA President Ann Weaver Hart at a special ceremony on April 25.

"I’m so proud to be part of this organization. Winning this honor wouldn’t be possible without the wonderful people I work with both on and off campus," said Enfield. “I love my job and being a small part of the great things being accomplished by the people of the College of Engineering and the University of Arizona."

After serving a stint in the armed forces, Enfield began his career at the UA in 1988 as a lab technician in the electrical and computer engineering department and has served as electronics technician, supportsystems analyst, systems programmer, and computing manager. He is now in charge of technology management for all eight departments within the College of Engineering, on and off campus.

Enfield’s team says he would never ask them to do something he wouldn’t do himself, faculty members say he has kept up an almost superhuman pace, and colleagues say he is one of the most compassionate and professional people they have ever known.

"Leo is a warm, caring person whose credo is to serve others, often at the expense of his own personal priorities," said Jerzy Rozenblit, UA Distinguished Professor and former head of ECE, of the largely self-taught IT manager. "I deeply respect him, admire his qualities, and clearly see him as my peer."

His is a 24-7 job, and all too frequently Enfield is called on for assistance outside the normal workday and workweek.

"Even if you call him to fix your monitor, and the fix is simply turning it on," said Seth Gilchrist, a member of College of Engineering’s Computer Services Group, "when Leo presses the power button, it is not with condescension, rather it is with the empathy of a co-conspirator against the countless frustrations of technology."

Enfield’s compassion, empathy and respect extend beyond the University, where he serves on the board of directors for the nonprofit Top Dog, which teaches people with disabilities how to train their own dogs to become fully certified service dogs. He also assists countless friends and neighbors with their computing needs.

Varney, who passed away in October 2010, wore many hats during his career at the University, including that of acting athletic director, vice president for business affairs and director of the Student Union.