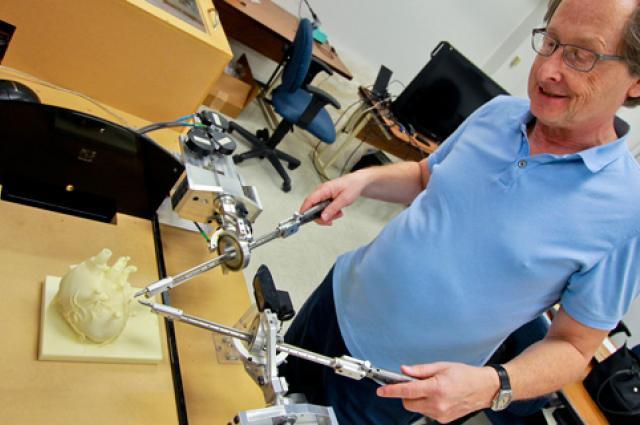 The Society for Modeling and Simulation International, or SCS, has made Jerzy Rozenblit, University Distinguished Professor and former head of the Department of Electrical and Computer Engineering, a fellow of the society for his work in the medical field.

Rozenblit’s honor was awarded not only for his body of work in modeling and simulation over the years, but also on the heels of his recent work on a simulation device for computer-aided training for surgeons conducting laparoscopic surgery.

"It is certainly very nice to have the recognition of colleagues and coworkers,” said Rozenblit. "It’s reaffirmation that what you’re doing makes sense.”

Rozenblit, who holds the Raymond J. Oglethorpe Endowed Chair of Electrical and Computer Engineering, was elevated from member to fellow upon nomination in 2017. The SCS awards the distinction to only one percent of its members, for accomplishments in and contributions to the advancement or application of modeling and simulation.

The computer simulation device allows surgeons to gain, in a virtual environment, the extensive training required for robotic laparoscopic surgery. The system reduces the risks to patient safety and gives unlimited training to surgeons-to-be.

Surgeons performing laparoscopic surgery use a small camera at the end of a thin telescope to enter a small incision in a patient, and the camera displays the images in real time. The drawback is that displayed images limit the surgeon’s ability to perceive depth, which increases the chances of harming the patient.

Rozenblit’s goal is to correct this depth-perception issue with an idea inspired by the gridlines displayed on a car’s rearview camera.

"As you put the car in reverse, you see gridlines,” Rozenblit said in a radio interview. "Not only can I see how far I am from the obstacle, but I also see gridlines that tell me how wide the car is.”

Rozenblit’s plan is to overlay the camera images with these gridlines to aid the surgeon in directing robotic instruments.