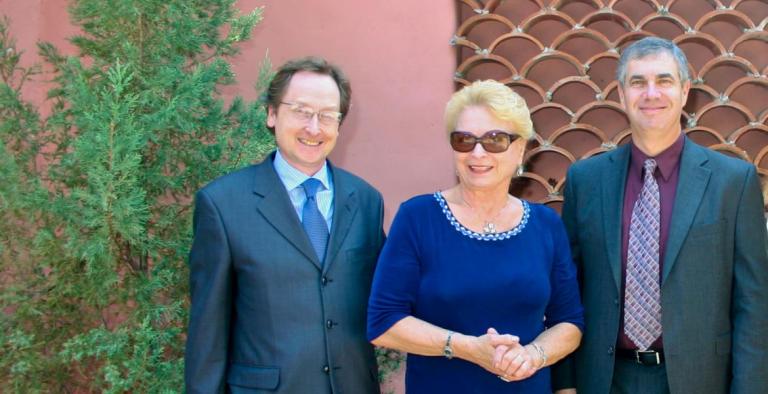 Jerzy Rozenblit, left, and College of Engineering Dean Jeff Goldberg, right, with Maria Keonjian at an August 2009 reception to celebrate the establishment of the Edward and Maria Keonjian Distinguished Professorship in Microelectronics.

The honor recognizes faculty who have shown a long-term commitment to undergraduate education and have made outstanding contributions at the University of Arizona. Rozenblit holds the Raymond J. Oglethorpe endowed chair and is head of the Department of Electrical and Computer Engineering. He also holds a joint appointment in the Department of Surgery.

Professor Rozenblit’s research and reputation are internationally known and respected. He is considered a founding figure in the engineering of computer-based systems, and his work cuts across the boundaries of many disciplines, including surgery, anthropology, and theatre arts.

His great passion, though, is teaching. During his 23 years at UA, he estimates that he has taught almost 5,000 undergraduate engineers. “It’s very rewarding,” he says. “I think this award reflects the commitment that I have and joy that I take from interacting with young minds, with the brightest and the best.” Fittingly, he has been selected by his students to receive three teaching awards.

Professor Rozenblit has provided scholarships for several disadvantaged students who have subsequently excelled in the ECE program. He established the Raymond J. Oglethorpe Undergraduate Fellowship in Computer Technologies in Clinical and Academic Medicine using funds from his endowed chair position.

College of Engineering Dean Jeff Goldberg says of professor Rozenblit: “Jerzy fits the mold of the renaissance professor. He has established a link between fine arts and electrical engineering, and is doing work in technical theater. He also has a link with surgery that has resulted in a teaching system for surgeons based around a robotic simulator. His whole career has focused on how to combine research and teaching in a really effective way.”

When asked about his legacy, Professor Rozenblit points out that in addition to his contribution to the body of knowledge, there is a personal legacy. “I have influenced my students’ lives in a very meaningful way,” he says. “I am driven by a desire to see the student become the master. That is an incredibly rewarding feeling.”