ECE Student Shifts From Surgical Robotics to Formula One Racing 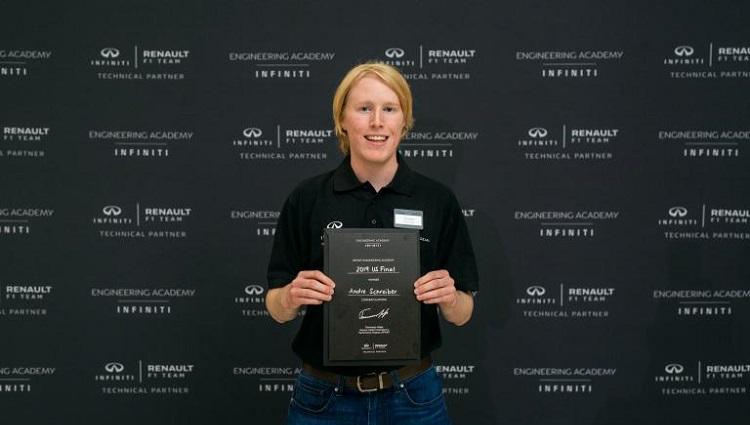 University of Arizona electrical and computer engineering student Andre Schreiber was recently selected as one of seven international students who will spend a year in the U.K. testing and designing parts for some of the world’s fastest cars. The Sedona, Arizona, native has followed Formula One racing for as long as he can remember, and he will spend a year with the INFINITI Engineering Academy training in the automotive and motorsport industries.

Roughly 3,000 people applied for the seven positions. Schreiber was up against more than 350 applicants from the United States. The 2019 application process for the academy was rigorous. After taking a math and logic test and attending a video interview, Schreiber and nine other U.S. candidates competed in Nashville. There, he took an exam, completed a decision-making challenge, went through an intensive interview and built a race car model.

“I got to compete against some of the best engineers in the country, and just being able to work with them was a great privilege,” said the Honors College student. “I am really looking forward to working with both the Renault F1 Team and Infiniti.”

“They involve the same skill set,"  Schreiber said. "Both try to model physical phenomena and re-create that."

Schreiber and the other winners, who make up the academy’s seventh cohort, will spend six months alongside the Renault F1 Team at the French automotive company’s technical center in Enstone, England, and six months doing engineering design and testing at Infiniti’s European Technical Center in Cranfield, England.