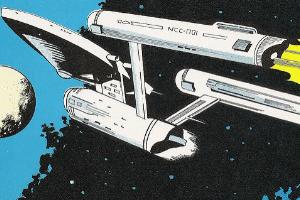 A comic book image of the Starship Enterprise from the original Star Trek series.

Recently, a U.S. Air Force general put out a call for a cloaking device that could protect equipment as large as a cargo plane.

If the request seems a bit "out there," it's close. The general says his inspiration for the high-tech materials from Star Trek.

"I asked industry for a cloaking device and they all laughed – they said 'you've been watching too much science fiction,'" said General Carlton Everhart, head of Air Mobility Command. "I said, 'Listen to me – this is what I want – something that would be able to change the waveform.'"

But professor Hao Xin may already have an answer.

In 2015 Xin's research into microwave frequencies produced metamaterials, artificial materials engineered to bend electromagnetic, acoustic and other types of waves in ways not possible in nature. In particular, they exhibited a property called negative refraction, meaning they could bend a wave backwards.

In theory, if applied to something like a cloak, someone looking at it would see part or none of what's underneath, depending on the cloak's refractive index distribution and whether the light bouncing off of it reached the viewer's eye.

A cloak is one thing. Could it be used to cover a plane, or a ship?

Xin said it could take years before a working prototype is ready; however, he believes it's possible within his lifetime.