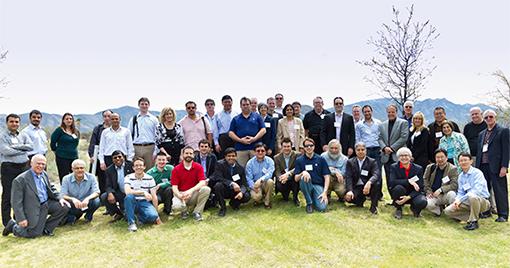 BWAC holds its first industrial advisory board meeting in the spring of 2013 at the UA’s Biosphere 2. In addition to the University of Arizona, BWAC’s founding members include Auburn University, Virginia Tech, the University of Virginia, Notre Dame, and a

Imagine a future beyond 4G; a future beyond smart phones, exciting new apps, and high-speed wireless internet connectivity at home, work, school and in transit. Imagine a world in which the heating and cooling of our homes is controlled from cell phones, where medical devices are wirelessly networked and surgeries performed remotely, where rural communities communicate just as quickly and reliably as urban centers, and where computing efficiently and securely in the cloud is second nature.

Realizing that vision of effortless connectivity anytime, anywhere is dependent on the creative collaboration of many highly skilled and knowledgeable people, all focused on developing the next generation of reliable and sustainable broadband wireless technologies. Backed by National Science Foundation funding of nearly $1.6 million over the next five years and industry support of about $4 million, such is the mission and work of BWAC, the new multi-university Broadband Wireless Access & Applications Center, led by the University of Arizona.

"The NSF support is a great boost and gives us a green light to many 5G-level projects under consideration within this multi-university, multi-industry consortium," said Tamal Bose, head of the UA Electrical and Computer Engineering Department and the project’s principal investigator.

As an NSF Industry & University Cooperative Research Center, BWAC is dedicated to partnering with industry and government in development of long-term solutions to far-reaching technological problems. In addition to the University of Arizona, BWAC’s founding members include Auburn University, Virginia Tech, the University of Virginia, Notre Dame, and about 20 industry partners.

"With several billion mobile users around the world expected to tap into unprecedented broadband speeds and increasingly massive bandwidth by the end of 2013, managing the ensuing data onslaught and securing the airwaves will be chief among the challenges BWAC tackles," said Bose, who successfully headed up BWAC’s predecessor, the Wireless Internet Center for Advanced Technology, or WICAT, at Virginia Tech.

Bose is joined at the UA by Marwan Krunz, world-renowned researcher in computer networking, and Haris Volos, whose expertise includes artificial intelligence applications for cognitive radios, wireless distributed computing, and the co-existence of communications and radar systems.

"As the hub of BWAC, the UA Department of Electrical and Computer Engineering is well positioned to guide collaborative research and the development of new wireless technologies emerging from member universities," said Bose.

"ECE affords BWAC an extensive computing infrastructure, essential to the investigation of proposed research. And the department has the capability of performing all electromagnetic design and simulation as well as fulfilling the fabrication and integration requirements of projects in development."