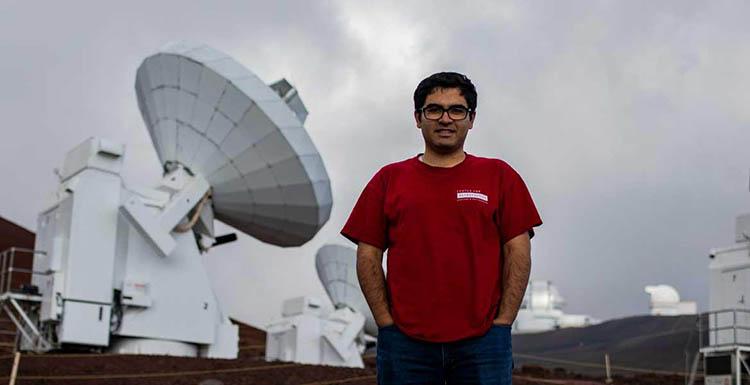 When he was a kid growing up in Iran, Arash Roshanineshat spent a lot of time looking up at the sky while his uncle and cousin pointed out constellations. Now he does his stargazing with the high-powered telescope of the Steward Observatory and as part of the global Event Horizon Telescope, or EHT, team. The team captured the first image of a black hole and announced its discovery earlier this year.

Roshanineshat, an ECE doctoral student minoring in astronomy at the UA, has also studied at Cleveland State University and the University of Zanjan in Iran. He began working on the EHT project during an internship at the Harvard-Smithsonian Center for Astrophysics.

“I’ve always been interested in looking at the sky,” he said. “But I didn’t know I could work on this subject while I was doing my studies in electrical engineering.”

The EHT project involves combining the powers of telescopes all over the planet to capture data from space – about 5,000 trillion bytes of data, enough to keep a playlist of high-quality MP3 files playing for 4,700 years. Roshanineshat is working on signal processing algorithms for taking the data, processing and recording it, and passing the data on to astronomers.

“EHT is the type of project that includes scientists from many backgrounds: astronomers, chemical engineers and chemists, electrical engineers, computer scientists,” he said. “I am really happy to be a part of this collaboration, and I’m determined to do my best to ensure I make the most of the opportunity.”

Learn more about Roshanineshat’s role in the EHT project in this KGUN9 clip.