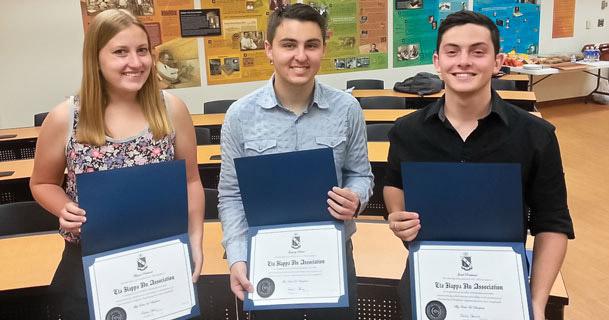 Students Megan Pritchard, Greg DePaul and Jake Rockland at their induction into Iota Xi, the UA student chapter of the Institute of Electrical and Electronics Engineers-Eta Kappa Nu.

Iota Xi, the University of Arizona student chapter of the Institute of Electrical and Electronics Engineers-Eta Kappa Nu honor society, or IEEE-HKN, has received the organization’s Outstanding Chapter Award.

The UA was selected from more than 180 active chapters from around the globe for its programs and activities to foster student success and provide outreach.

Hal Tharp, UA associate department head of electrical and computer engineering and faculty adviser to Iota Xi, accepted the award for the chapter at an IEEE-HKN reception during the 2015 annual conference of the Electrical and Computer Engineering Department Heads Association in Hilton Head, South Carolina, on March 16.

"The IEEE-HKN students have really stepped up their level of engagement the past couple of years," Tharp said. "This international honor helps validate and reward the effort put forth by the HKN officers and students."

"Iota Xi is an extremely active chapter, and the IEEE-HKN board of governors was impressed by several of the programs we described in our annual report," said Megan Pritchard, chapter vice president and a junior majoring in electrical and computer engineering.

They include research tech talks, in which the chapter brought in outside speakers from industry to speak to UA students on campus; establishment of a Student Excellence Award program to honor outstanding ECE undergraduates; and demonstrations of electricity and electromagnetism for children at the Wheeler Taft Abbett Sr. Public Library in Tucson. The chapter also participated in national IEEE-HKN programs, including the Student Leadership Conference in Ames, Iowa.

This marks the fourth time the UA chapter has received the Outstanding Chapter Award since it was established in 1933, and the first time in more than 20 years.

When it comes to IEEE recognition, University of Arizona students are in good company. Six members of the College of Engineering faculty have been named IEEE fellows for extraordinary accomplishments in the profession. The IEEE is  the world’s largest professional association for the advancement of technology, with more than 395,000 members in 160 countries.