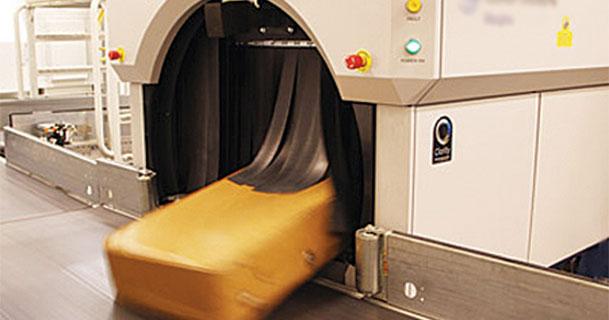 The research team will develop an information-theoretic system design, based on the mathematics of compressive measurements, to more efficiently detect explosives in baggage X-ray machines, such as the one shown here.

Most travelers checking their bags for a trip are thinking about getting where they are going. Not Mark Neifeld. He is thinking about how to develop better mathematical tools to improve baggage scanner bomb detection.

Neifeld and his multidisciplinary team have been awarded $3.7 million, in two separate proposals, from the U.S. Department of Homeland Security to advance X-ray detection of explosives, especially emerging homemade bombs, in checked baggage aboard commercial aircraft.

Building on their U.S. Department of Defense work in KECoM, or Knowledge Enhanced Compressive Management, Neifeld’s research team will develop an information-theoretic system design, based on the mathematics of compressive measurements, to more efficiently detect explosives.

Airport X-ray systems are not optimized for the detection of improvised explosive devices, explained Neifeld, who holds a joint appointment in Optical Sciences. They collect far more visual information than is needed because they do not effectively differentiate between the clutter and the threat.

“In such a highly resource-constrained environment, it is critical that all measurement resources be directed toward the optimal extraction of task-relevant information,” he said.

The system under development will enable the collection of less data but much more relevant information, and the process will be quicker. It is expected to increase detection rates of explosives, while reducing the cost of X-ray scanning.