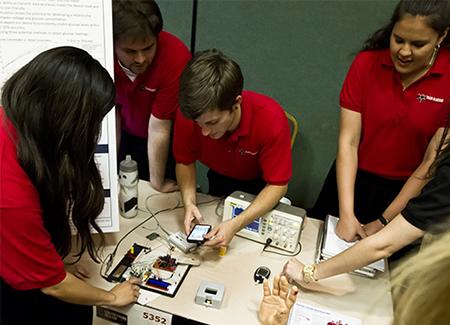 Team Glucose is headed to Dallas for the Texas Instruments Analog Design Contest.

Acclaim keeps coming for a 2013 University of Arizona College of Engineering Senior Design team that included two students in the electrical and computer engineering department: Melvin Barney and Brian Suarez. The two helped design an award-winning disposable, low-power blood glucose meter, and their team is now headed to Dallas to compete in the 2013 Texas Instruments Analog Design Contest.

"We designed a glucometer that is much more accurate than other glucometers on the market, and it has the ability to transmit the glucose readings to an iPhone," said Barney, who expects to graduate in December.
Glucometers help people with diabetes monitor and manage their blood glucose levels.

Team Glucose is among only 10 teams selected from 125 teams throughout the United States and Canada to compete during the July 21-23 Engibous Summit, named after TI’s former chairman and CEO, Thomas Engibous. The winning team will take home $10,000; second place $7,500, and third place $5,000. A "People’s Choice" award carries a $1,000 prize.

"Texas Instruments sponsors the Engibous Prize competition as a way to inspire engineering students and foster tomorrow’s innovators," said Art George, senior vice president and general manager of TI’s Analog Engineering Organization. "I’m impressed by the spirit of ingenuity the team demonstrated. It gives a great view into the exciting ways innovators like these can impact our world in the future."

At the 2013 UA Engineering Design Day, the team won Most Innovative Systems Integration and Best Team Leadership. Team members also won first and second prizes in the Fish Out of Water category.