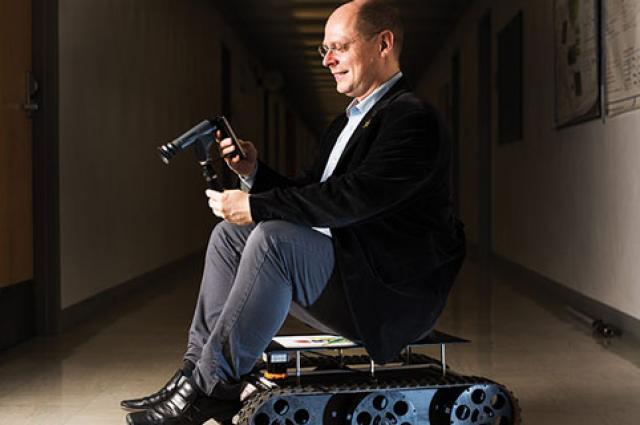 Wolfgang Fink examines a smartphone-based ophthalmoscope while sitting on a planetary rover; both encapsulate his artificial vision research.

Electrical and computer engineering associate professor Wolfgang Fink has been named fellow for the Arizona Center for Accelerated Biomedical Innovation for his research and advancements in the field of biomedical technologies.

"I felt very honored to receive this award," said Fink, who holds a joint faculty position in biomedical engineering. "It was definitely very nice to receive this recognition."

ACABI's purpose is to bring together biomedical experts to collaborate for the goal of accelerating the development of biomedical technologies.

"ACABI is like a think tank," Fink said. "So when a medical problem that involves engineering presents itself, the purpose is to brainstorm and come up with ways to solve it."

Fink's colleague, UA cardiologist and ACABI leader Marvin Slepian, calls ACABI "a creative engine," and Fink is an important cog in that engine. He is a leader in research and development for artificial retinas and vision science for the center, with 18 issued patents and several more pending. His goal is to "give vision back to blind people."

Also, as smartphones have become seemingly omnipresent, Fink said he is investing time and research into their potential use to conduct medical examinations worldwide.

"It would be something that provides quality health care to those in austere environments like third-world countries, to those deployed in the field or on a ship," Fink said. "Basically, any area where you do not have an expert within tens of miles. To make those examinations portable is a big deal."

In addition to the honor from ACABI, Fink was recognized as a da Vinci Fellow in 2015 and Fellow of the American Institute for Medical and Biological Engineering, or AIMBE, in 2012. He is also the inaugural Edward and Maria Keonjian Endowed Chair at the University of Arizona.